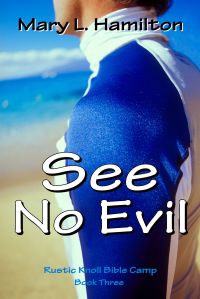 Today we get write to the point with Mary L. Hamilton. She visited us a while ago. You can read her first interview here. Read on to see what she is up to now.

Tell us about your newest book.

See No Evil is the third and final book in the Rustic Knoll Bible Camp Series. It features Steven Miller, a blind but capable camper who has appeared in both of the first two books. He guards a dark secret that he’s carried since his dad’s death three years earlier. When a friend begins a sexting relationship while at camp, Steven tries to keep his buddy from going down a familiar path without exposing his own shameful past.

What do you do when you’re not writing?

We’ve recently moved to a new town, so I’m still getting adjusted as we look for permanent housing. But I read a lot. I also like to knit sweaters and afghans, although summer in Texas is usually too hot for that. But I love being outdoors, enjoying nature.

Where do you get your ideas?

My ideas for this series came from real life. I grew up at a Bible camp, so I used some of my experiences there. Some of my characters were inspired by people I knew at camp. Others grew out of watching the struggles of my children’s friends. I like to think about situations I observe in real life and think about how to build a story around them.

Do you outline or are you a seat-of-the-pants writer?

I start with an outline of sorts. I generally know the beginning and the end and a couple of high points in the middle. See No Evil was different, because I didn’t really know how it would end until the day before I wrote the final scene. It was a struggle all the way through that book, not knowing exactly what target to aim for. I hope not to ever repeat that experience!

Have you written a book you love that you have not been able to get published?

I was very fortunate to have the first book I wrote published. I expect there will be others in the future that will have a hard time getting published. From what I hear, most every writer goes through that at some point.

Are you like any of the characters in your book?

I don’t see myself in any of the characters in this book. The main character in the first book, Hear No Evil, probably shared some of my own characteristics, such as timidity, holding back and not really being proactive, keeping things locked up inside.

Are you working on a new project now?

I’ve been rolling an idea around in my head and am starting to flesh it out. This will be more of an adult novel, one that came to me out of my own family. It’s kind of an Odd Couple situation where a soldier returns from deployment and must share an apartment with his free-spirited younger brother.

I’d like to give the Lord credit for See No Evil. Being a new writer, I didn’t plan well when I created Steven in the first book. He was the ever-cheerful, well-adjusted kid. That doesn’t make for an interesting main character. Then, my original plot for Steven’s story fell apart. There were times I considered giving up and admitting I couldn’t write. But I had a signed contract to fulfill, and I decided since God had provided this opportunity, He’s probably able to help me write the book. He does, after all, know something about writing a book! I determined to put forth my best effort, and He was faithful to the very end. I hope your readers will enjoy See No Evil, as well as the other two books, and know that God is faithful in all things.

Bio: Mary L. Hamilton grew up at a youth camp in southern Wisconsin, much like the setting 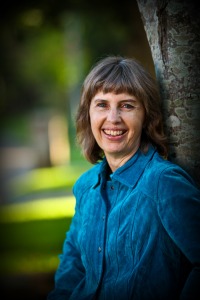 for her Rustic Knoll Bible Camp series. While raising her own three children, she was active in her church’s youth ministry, including serving as a camp counselor for a week. She decided once was enough.

When not writing, Mary enjoys knitting, reading and being outdoors. She and her husband make their home in Texas with a rescued Golden Retriever.

Dad drilled into Steven that blindness should never be used as an excuse. So when Steven finds an old triathlon medallion among Dad’s belongings, he’s inspired to follow in his footsteps. Maybe it’ll quiet the guilt he’s carried since Dad’s death three years ago.

While Steven continues his triathlon training during his final summer at camp, a serious illness keeps Rustic Knoll’s beloved Nurse Willie from managing her clinic. When Steven teams up with his friend Claire to encourage Willie’s recovery, his feelings for Claire grow beyond friendship.

But his buddy, Dillon, has started down a dangerous path that Steven knows all too well. Can he keep his friend from falling into that sin without exposing his own past?

It was great to hear from you, Mary. Thanks so much for taking time to share with my readers.