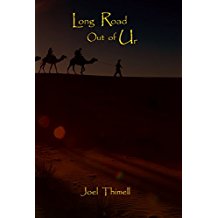 Something is rotten in Mesopotamia. A troublesome priest has been murdered; the pagan New Year’s rites defiled; a royal tomb is robbed; and a would-be grifter, Lot, is in the wrong place at the wrong time. His father, grandfather and cousin are each likely suspects and Lot doesn’t know who he can trust. Everyone thinks Lot knows where the loot is hidden and someone wants it all–even if it’s over Lot’s dead body.

“Long Road Out of Ur” retells the familiar story of the calling of Abraham and Sarah to the Promised Land through the voice of Lot. Yes, that Lot–the one who barely escaped the destruction of Sodom with his daughters–his wife wasn’t so fortunate.This is not a Sunday school version of their lives, and they are not alabaster saints. Instead, it’s a lively coming-of-age adventure tale crossed with a murder mystery and a heaping helping of social satire. Think of it as something like “Huckleberry Finn” combined with “North by Northwest” but set in the Bronze Age.

Lot’s comical attempts to con his way out of danger only entangle him deeper and deeper in a web of greed, betrayal and murder. From the fashionable society of Susa through the murky waters of the Great Swamp to the stone huts of Elam, Lot tries to run but he can’t hide. Searching for any way out, he battles evil giants, fake princesses and blood-thirsty pirates but his greatest struggle is finding himself.

Can a two-bit con man change his spots? Or will his past destroy him?

Can a prodigal son and his prodigal father ever forgive one another? Or are some wounds just too deep to heal?

I  have never read a story about Lot, he’s never been overly likable. But this book puts him in a new light, and even Abram (Abraham) for that matter.

The writing is well done, engaging narration and rich detail. I could easily see the people and things around Lot and what was happening.

My only draw back was I felt there was a lot of bunny trails, we followed every thought that Lot had and explored its back story. I felt that slowed the story down a bit. This wasn’t a quick read for me, and that’s okay.

But overall, very rich in story and well researched.

Grab your copy at Amazon or Barnes and Noble.

A copy of this book was given to me by the author. All opinions are my own.