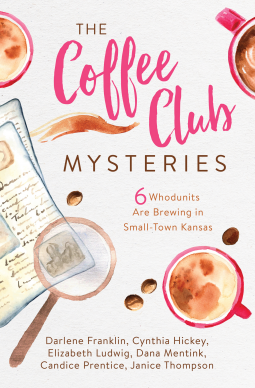 Six Mysteries Are Brewing in Small-Town Kansas
The coffee shop on the corner of First and Main in Oak Grove, Kansas, seems to attract a series of mysterious events. Or perhaps it is the six women who frequent the shop for book club who are the magnets for trouble. . . .

Morgan Butler, owner of the Coffee Perk, finds a project worker hanged at her shop.

Harper Daggett is being stalked for an antique jade owl she bought.

Penny Parson finds a gun in one of her beehives.

Join them as they unravel six unexplained events that have the potential to ruin business and spoil friendships if not handled with care.

This is a collection of cute, cozy mysteries all tied together with the ladies in the coffee club.

Of course there are some stories I liked better then others, just different writing styles. But if you enjoy a light-hearted mystery this collection would be up your alley.

I did have trouble gauging how old the ladies where until it was there story, that wasn’t made very clear in other book. They are a wide variety of ages as it turns out 🙂

A copy of this book was given to me through Netgalley.com. All opinions are my own.

Elizabeth Ludwig is an award-winning author whose work has been featured on Novel Rocket, the Christian Authors Network, and The Christian Pulse. Her first novel, Where the Truth Lies (co-authored with Janelle Mowery), earned her the 2008 IWA Writer of the Year Award. This book was followed in 2009 by “I’ll be Home for Christmas”, part of the Christmas anthology collection, Christmas Homecoming.

In 2011, her second mystery, Died in the Wool (co-authored with Janelle Mowery) was nominated for a Carol Award. In 2012, the popular EDGE OF FREEDOM series released from Bethany House Publishers. Books one and two, No Safe Harbor and Dark Road Home, respectively, earned 4 Stars from the RT Book Reviews. Book three, Tide and Tempest, received top honors with 4 1/2 Stars.

Elizabeth is an accomplished speaker and teacher, often attending conferences and seminars where she lectures on editing for fiction writers, crafting effective novel proposals, and conducting successful editor/agent interviews. Along with her husband and children, she makes her home in the great state of Texas.

Two years ago, her fiance perished during their voyage to America.

Now she discovers it may have been murder…

Dreaming of a better life, Tillie McGrath leaves Ireland behind and, with her beloved fiance by her side, sets sail for America. But when illness robs her of the man she holds dear, she’s left alone with only a handful of tattered memories. While forging on proves difficult, Tillie soon finds some new friends at her New York boardinghouse, and begins pursuing a new dream–to open a home for orphaned children.

Despite two years passing, Captain Keondric Morgan has never forgotten the lass who left his ship so heartbroken. When a crewman’s deathbed confession reveals her fiance’s demise was the result of murder, the captain knows he must try to contact her. But his attention draws the notice of others as well–dangerous men who believe Tillie has in her possession something that could expose their crimes. And to their way of thinking, the best way to prevent such an outcome is to seize the evidence and then hand Tillie the same fate as her naïve fiance.

If you would like to read the first chapter of Tide and Tempest, go HERE.

Elizabeth has written another page turner. It was nice to catch up with some familiar characters. But, have no fear, even though this is the third book in a series if you haven’t read the first two you won’t be lost. Actually, I have read the second one and I found myself wasting time trying to remember what happened so I could make the connections. But I don’t really think any connections needed to be made. You could easily pick of this book and fully enjoy it.

And there is a lot to enjoy. I love good Irish characters and I couldn’t help but think that handsome Irishman (Captain Morgan) on the front cover reminded me of my Irish husband.

Elizabeth has weaved together a layered story full of romance and suspense. There’s even a bit of jealousy between two brothers who are looking out for Tillie (our heroine). I loved that tension. But Tillie was definitely drawn more to the more solemn, serious brother, Captain Morgan.

I so identified with Tillie being unable to forgive herself for her past. She has made mistakes like so many of us and wonders how any good man could ever love her as tainted as she is and if God can truly forgive her for what she has done?

Then there’s all the suspense. Who can Tillie really trust, who will die next? Why are people dyeing in the first place? So many questions and the only way you will find the answers is by reading the book.

This is the perfect marriage of historical romance and suspense all in one book.

A copy of this book was given to me by the publisher through the Christian Fiction Blog Alliance in exchange for an honest review.

From the back cover:

The nightmares of her past have found Ana Kavanagh an ocean away.

Ana Kavanagh’s memories of Ireland are mostly of fire and pain. As a girl she survived a blaze that left her an orphan, left her scarred, and left her angry at God. Now in New York, Ana finds a kindred spirit in Eoghan Hamilton, who’s struggling with his own anger. His twin sister, Cara, betrayed him by falling in love with his enemy.

Cast aside by everyone, Eoghan hopes to rejoin the Fenians, an organization pushing for change back in Ireland, by securing information against Rourke, the man his sister married. Ana, Cara’s friend, may be his best source, and despite the attraction he feels, Eoghan determines to use the girl’s sweet nature to his advantage.

Adding to the danger is a specter from Eoghan’s own past, one whose thirst for vengeance knows no bounds. Eoghan must choose which road to follow–bitterness or forgiveness–and where to finally place his trust.

My thoughts and giveaway:

I really liked this book. I was immediately drawn into the story. It begins with a very mysterious scene and some not-so-nice men. From there I had to see what would happen.

Of course I am a bit bias, since I am a woman who married an Irishman and then named her children Irish names. The main characters are Irish and I even had to look up how to pronounce Eoghan, the hero. (It’s Owen in case you don’t know like me) So all this Irish stuff had me loving the book.

Ana, the heroine, is hiding from her past, but it catches up with her when she meets Eoghan. The romance is on simmer for a while, just the way I like it, and the heat gets turned up gradually.

As things fall into place at the end, and you have the ah-ha moment, you get sweet satisfaction in a wonderfully put together ending.

This really is more of a historical romantic suspense book, not sure if that is the genre it is really under but that’s how I would classify it.

This is the second book in a series. The first is No Safe Harbor.  I haven’t read the first but I didn’t feel lost at all, however, this book does pique your interest in No Safe Harbor.

I highly recommend this book, it’s very well written and a great story with great characters.

Grab your copy at your local book store, Amazon, Barnes and Noble, Christianbook.com, Deeper Shopping, Books-A-Million or the publisher.

Win a copy of your own by leaving a comment by September 1st at 5:00 pm. (U.S. residents only)

A copy of this book was given to me by the publisher in exchange for an honest review.